Darwin‘s Doubt: The Explosive Origin of Animal Life and the Case for Intelligent Design, Stephen C. Meyer. Harper One, 2013. 412 pp.

Stephen Meyer has followed his highly acclaimed, Signature in the Cell, with a worthy sequel.   The sequel, Darwin’s Doubt, blends the findings from molecular biology found in his first book with discoveries in paleontology, anatomy and other 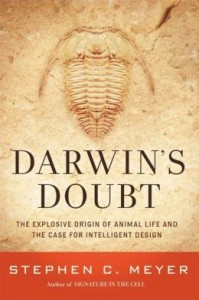 disciplines in order to make the case for intelligent design as the best scientific explanation for life’s origin and development.  And Meyer does this in his usual clear and composed voice while explaining some complicated material without the distracting emotion that often distorts the study of origins.

“Darwin’s Doubt” refers to Charles Darwin’s admission in his consequential book, On the Origin of the Species, that the fossil record contradicted his theory that life began with simple organisms and it then progressed through endless transitions on up to the present.  As he admitted: “The abrupt manner in which whole groups of species suddenly appear in certain formations has been urged by several paleontologists – for instance Agassiz, Pictet, Sedgwick – as a fatal objection to the belief in the transmutation of species.  If numerous species belonging to the same genera or families have really started into life all at once, the fact would be fatal to the theory of descent with slow modification through natural selection.”

Yet the fossils from the so called “Cambrian Explosion”, about 530 million years ago, reveal the emergence of  “a veritable carnival” of  basic body plans of animal and plant life which appear fully formed in about a five million year period.  As a Chinese paleontologist has written, “compared with the 3-plus-billion-year history of life on earth, the period [of the explosion]can be likened to one minute in 24 hours of one day.” And even the Darwinist operative, Richard Dawkins, has conceded that the plants and animals in the Cambrian “look as if they were just planted there without any evolutionary history.”

All of which is the exact opposite of Darwin’s prediction that life gradually evolved in tiny incremental steps through the trial and error process of natural selection.

Indeed, the Cambrian Explosion reveals much about the shaky foundation of Darwin’s theory and not just because of the discoveries in paleontology.  Other disciplines like developmental and molecular biology and newer areas like epigenetics compound the problem of having complex life develop without ancestors and in such a short time.  As Meyer writes, the  neo-Darwinism mechanism of mutation and natural selection, “does not account for either the origin of the genetic or the epigenetic information”, the latter being outside of the cell’s DNA and not subject to the effects of mutations.

That is, developing complex bio-chemicals and then in the most exacting and intricate way, engineering their information processes to perform in unimaginably complex, coordinated and purposeful genetic and extra genetic ways would have to have taken place. As Meyer writes, “the probability of generating just one gene from all the bacteria (and other organisms) that have ever lived on earth is just 1 in 10 trillion, trillion, trillion. ”

“Time & chance”,  the makers of life according to Darwin,  need not apply as credible candidates for such a task.  In Darwin’s day “time & chance” could perhaps be imagined as makers of life both because the understanding of biological organisms was simplistic and because 19th century utopian dreamers thought that social evolution as well as revolution would make “the new man”, an idea that still persists.

But the 20th century has been especially harsh on those simpletons and dreamers, Darwin primary among them.   Meyer shows this by lining up respected scientists, including those of the Darwinist, materialist persuasion, who, nonetheless, have discredited every aspect of the Darwinian project, from the failure of natural selection to make anything new, to the failure of contemporary Darwinist nostrums like “hox genes”, once thought to be kick-starters of the evolutionary process.

Yes, it is true that the Darwinian mechanism of mutation & natural selection can cause small changes, “adaptations”, as when bacteria develop resistance to antibiotics and insects develop resistance to pesticides.  But to repeat what is now a truism, or should become one: “Darwin explains the survival of the fittest, not the arrival of the fittest”, the latter being precisely what he promised to explain in his iconic book on the origin of species.

Meyer goes over all of this as well as how Darwin thought his theory would be rescued by later fossil finds, inaugurating a faith tradition relied upon by evolutionary biologists since then in order to keep the theory afloat despite the evidence, not because of it.  In support of this longing for evidence, Darwinists  have diligently developed a bullpen of backup arguments to replace Darwin’s starting arguments as each one of them got knocked off the mound.

The most prominent of these arguments, “punctuated equilibrium”, purports to tell paleontologists why they don’t see in the fossil record what Darwin told them that they were supposed to see.  This rationalization, cooked up by Stephan Jay Gould, goes like this: evolution occurred in small groups of organisms away from larger populations; thus, few if any “intermediates” in-process-of-becoming-something-else are preserved in the fossil record, creatures that might be half reptile and half bird, for example.

In the last third of the book, Meyer tests the various neo-Darwinian explanations for life, including theories of self organization. He also discusses the ideas of James Shapiro, the prominent University of Chicago biologist,  whose “work represents a promising avenue of bringing new insight into how the cell’s information-processing system” alters its genetic information in response to change.  But these explanations all fail because they are exercises in question begging; or as Meyer puts it, they “assume a gene”,  the making of which is one of the questions to be answered in  the first place.

So Meyer, a geophysicist with a Cambridge Ph. D in the history of science, shows in this book that all mindless, materialist forces don’t pan out as explanations of life’s origins and development. Such explanations have invariably turned out to be intellectual fool’s gold.

Yet a tradition of reasoning that we all use in assessing the causes of past events does exist. It is called “abductive reasoning”, a concept Meyer borrows from the American philosopher, Charles Pierce.   The father of modern geology, Charles Lyell, for example, relied on such a process when he reasoned that the forces that sculpted  the crust of the earth are the same forces that are still at work;  AKA “the present is the key to the past.”

Relying on Lyell’s dictum,  Meyer asks: What in our common experience is the source of the complex, specified information that is observed in the organic cell?  Intelligence is the only source responsible for such information, not an accidental un-intelligent force like blind, Darwinian evolution.

But mind is an “unseen force”, materialists argue who, like 19th century phrenologists, yearn for an explanation that they can physically lay their hands on. But gravity is invisible, yet it remains a fundamental part of the scientific edifice precisely because, like intelligence, we constantly witness its effects.

The origins debate is not simple and this book may appear imposing and complicated. But Meyer is a talented writer with an easygoing voice who has blended interesting history with clear explanations in what may come to be seen as a classic presentation of this most fundamental of all debates.