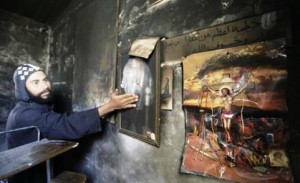 image—the surest way of exposing its supremacist and intolerant elements and one of the main reasons the major media and establishment rarely report or address it.

The logic (fully explained here) can be summarized as follows:

Islamic and jihadi attacks targeting the West or Israel pose no problem to the image of Islam.  No matter how violent or brutal, no matter how many Islamic slogans are shrieked—“Allah commands the subjugation of infidels!”—Muslim violence against the West and Israel will always be dismissed as desperate acts of disempowered, oppressed, and frustrated Muslims—the “underdogs,” which the West tends to romanticize.

And so they will always get a free pass, without further reflection.

This is the dilemma that none other than Ayman al-Zawahiri, chief of al-Qaeda, understands.

A few days ago, the Associated Press reported that:

It was a rare call by Ayman al-Zawahri in defense of Christians, who largely supported the popularly backed coup against Mohammed Morsi and were subsequently targeted by a wave of violence.

In an audio message posted on militant websites, al-Zawahri said it was not in the interest of Muslims to be engaged with the Christians because “we have to be busy confronting the Americanized coup of (Gen. Abdel-Fattah) el-Sissi and establish an Islamic government instead.”

El-Sissi is Egypt’s defense minister who overthrew Morsi after millions of Egyptians protested to demand he step down. The head of the Coptic church supported the coup along with other groups.

“We must not seek war with the Christians and thus give the West an excuse to blame Muslims, as has happened before,” al-Zawahiri said.

Although Maamoun Youssef, the AP reporter who wrote this story, portrays it as “a rare call by Ayman al-Zawahri in defense of Christians,” and although the report is titled “Al-Qaida leader opposes fighting Christians,” in fact, Zawahiri’s communique has nothing to do with “defending Christians” or “opposing” the overall jihad on them.

Indeed, Zawahiri himself played an important role in inciting mass violence against Coptic Christians following the anti-Islamist June 2013 Revolution—leading to the destruction of some 80 churches, some with al-Qaeda flags planted atop them.

Moreover, Zawahiri’s like-minded brother and Salafi front-man, Muhammad, allegedly called ousted president Morsi while he was still in office, insisting that the latter take measures to force Christians to pay jizya and live in abject humiliation, according to Koran 9:29.

Instead, Zawahiri’s rationale for this communique “in defense of Christians” is that, in his own words, “We must not seek war with the Christians and thus give the West an excuse to blame Muslims.”

Zawahiri knows that Islamic jihadis waging terrorist attacks on Egypt’s military and state targets will be portrayed in the West as oppressed and frustrated “freedom fighters” doing whatever is necessary to overthrow “tyrannical” powers.

But such “heroic” depictions disappear once these same jihadis persecute the unarmed Christian minorities in their midst simply for being Christian.

Zawahiri understands that, not only are such attacks strategically ineffective—kill all the Copts you want, it won’t bring Morsi back—but they unequivocally expose the true face of the “freedom fighters,” one that can only be seen as inherently fascistic and intolerant.

And the fear that Zawahiri and others have is that some people in the West might actually begin to connect the dots and conclude that, if jihadis persecute Christian minorities simply because they are non-Muslim “infidels,” perhaps that is also the true reason they are at war with Israel, the West, and non-Muslims everywhere.

Perhaps the jihad is less about political and territorial “grievances” and more about religious intolerance and Islamic supremacism—as unprovoked attacks on disenfranchised non-Muslim minorities clearly indicate; as al-Qaeda’s once clandestine writings to fellow Muslims indicate.

Hence, the true reason why the astute Zawahiri is trying to call off the jihad on Christians.