With his presidency in tailspin, Carter radically changed course. Will Obama do the same?

By the beginning of 1980, Jimmy Carter was in big trouble. Almost everything he had said or done in foreign policy over the prior three years had failed — and he was running for reelection. 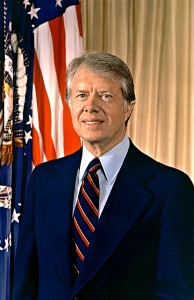 Carter had come into office in 1977 promising a new American stance abroad predicated on human rights. He bragged of an end to our supposedly inordinate fear of Soviet-inspired Communism. He entertained the hope of not losing a single American soldier in combat during his tenure. And he rejected the realpolitik of the Nixon-Kissinger years.

The State Department would end the excessive influence of the bellicose National Security Council. Secretary of State Cyrus Vance would put a kinder, gentler face on American diplomacy. We championed Robert Mugabe in Zimbabwe over more moderate black reformers. We broke with the Shah of Iran, who fled his country in January 1979. We for a while praised the Ayatollah Khomeini and sought ways to reach out to him. Carter’s U.N. ambassador, Andrew Young, called Khomeini “some kind of saint.” Young met secretly with PLO representatives in Kuwait. In an interview, he falsely alleged of his own country that “We still have hundreds of people that I would categorize as political prisoners in our prisons.”

The same formula was used in Nicaragua, as we welcomed the end of the despised Somoza regime and looked to Marxist rebels to provide long-delayed social justice for the region. Carter spurned South Korea, as if North Korean threats were not all that serious, or perhaps were even understandable, given U.S. Cold War machinations. Carter wanted to pull U.S. troops out of South Korea as a way of easing tensions on the 38th Parallel. He was clearly uncomfortable with Israel. He often distanced himself from Europe.

For a while, there was calm. Stunned potential aggressors only eyed one another to see who might be the first to test this strange new break with nearly four decades of bipartisan American foreign policy. But then, in late 1979, things started going downhill fast — as if the gamblers thought it was time to cash in their chips for fear that Carter might not win another four years in office.

Soviet-inspired Communists were on the rise in Angola, Ethiopia, and Mozambique. Islamists stormed the U.S. embassy in Tehran and took American hostages. Vietnam fought a tough border war with China. Much of Central America was in turmoil. Gas prices soared as the U.S. tried to enforce an embargo on Iranian oil. The Russians invaded Afghanistan. The general impression of American impotence was best summed up by the radical Iranian line, “America can’t do a thing.”

Carter was dazed. He had come as a Light into the world to save it, and now the world had rejected him. Why was his magnanimity sneered at as weakness rather than appreciated and reciprocated with good will? Did these ungrateful countries not realize that they were only making American realpolitikers and reactionaries look good — and thus undermining a rare American internationalist who was more a citizen of the world?

Soon, a few of those around Carter became quite concerned that the old world order, at least as they had known it since the end of World War II, was unraveling. This was not good for Democratic chances in the upcoming 1980 elections.

Then all of a sudden Carter flipped. By January 1980 there was a new Carter Doctrine, warning the Soviet Union that the Persian Gulf would be protected by force if necessary. Saudi Arabia may have been a misogynist, fundamentalist, and autocratic monarchy, but human-rights advocate Jimmy Carter declared it was central to Western interests and vowed to protect the Saudi royals.

In an effort to embarrass Moscow, the host of the 1980 Summer Olympics, for the first and only time in history America boycotted the games. Carter stopped the Nixon détente practice of exporting U.S. grain to the Soviet Union. He began arming the rebels in Afghanistan. He hiked defense spending up well over 4 percent of GDP — and well over the levels that had been promised by the hawkish rival presidential candidate Ronald Reagan in 1976. Cyrus Vance and Andrew Young both had left the administration by then. Carter stopped sending appeasing envoys to Iran. He suggested that he would not rule out another effort to rescue the hostages, even though his first attempt had failed miserably.

The rest is history. Carter’s efforts were all too little, too late. Ronald Reagan came to power. He ended Carterism, and won the Cold War by projecting U.S. strength and confidence to a tottering Soviet Union.

Will Obama follow the Carter script? His foreign policy, like Carter’s in late 1979, is wrecked. Vladimir Putin saw Obama’s trashing of George W. Bush and loud boasts about “reset” as weakness to be exploited, not as outreach to be matched. Any former Soviet republic that has a large minority of Russian speakers feels that it is next in line for Putin’s bullying — and does not believe Barack Obama’s now-empty “step-over lines,” “red lines,” or “deadlines.”

Obama’s outreach to Latin American Marxists was a colossal failure. Venezuela is now a failed state — with one of the world’s largest reserves of oil. In Nicaragua, Daniel Ortega humiliated Obama with a long public dressing down. Cuba, Ecuador, and Argentina are more anti-American than ever.

Secretary of State John Kerry believes the chief challenge to the world is global warming, although the planet’s temperature has remained unchanged for nearly two decades, even as carbon emissions have soared. The Great Lakes are frozen over as the president claims global warming is “settled science.”

The Middle East is a mess. The United States’ heroic effort to stabilize Iraq was thrown away when Obama yanked out all U.S. troops after the success of the surge. Afghanistan, where more U.S. soldiers have died in Obama’s five years than in Bush’s seven, is on the path of Vietnam in early 1975.

Iran will get the bomb. All the efforts to achieve an effective boycott have been abandoned willy-nilly without any Iranian concessions.

Red lines in Syria only empowered Assad and Putin. The corpses pile up, and the idea of the Russians and Syrians accounting for WMD is a cruel joke.

Libya is Somalia on the Mediterranean, a failed state that looks across to Europe. So does Egypt, where we at one time or another have backed and then withdrawn support from three successive regimes — and tuned out the once lavishly praised Arab Spring.

Relations with Israel are at an all-time low. Our special relationship with Turkey only green-lighted Recep Erdogan’s efforts to undermine democracy and Islamicize his country.

Our efforts to reduce our strategic arsenal in association with Vladimir Putin, together with our new Hamlet-like stance towards China, have terrified our Pacific allies. In the next three years, Japan, South Korea, and Taiwan (and perhaps the Philippines and Australia as well) will either make concessions to China or threaten to go nuclear — if their suspicions continue to grow that they are no longer under the U.S. strategic umbrella.

So: Will Obama’s advisers Carterize the president — that is, persuade him to step back, as Carter did in 1980? Probably not — and for a variety of both practical and ideological reasons.

1. Carter wanted to get reelected and defuse Reagan’s stinging charges of appeasement. Obama has been reelected and is not running for anything. To the small degree that U.S. foreign policy is an issue in the upcoming 2014 midterm elections, the lame duck Obama himself doesn’t much care about the consequences of reduced U.S. stature on his party’s chances — or perhaps, for that matter, even care that much about his party’s chances.

2. Carter acknowledged that he had failed. He grudgingly accepted the fact that deterrence is acquired over time and with difficulty, while lost quickly and easily.

In contrast, Obama still feels that his foreign policy is a smashing success. The United States’ prior inordinate and undeserved stature abroad has been reset. Putin is of no concern, given Obama’s belief that gamesmanship, “macho schtick,” and diplomatic chess-playing are proof of unsophistication and rather silly. As far as the former Soviet republics go, arbitrary borders are always fluid anyway. Let them ebb and flow, as we deal with climate change.

3. Carter was iconic of nothing by 1980. He was an ineffective speaker and without a base of support. The press had tired of his uncharismatic whining and sermonizing. In short, Carter feared that the press thought he was weakening America.

Not Obama, our landmark first African-American president. The media are deeply invested in his success. His teleprompted eloquence still makes good sound bites. If Carter de facto blamed himself for the need to readjust radically and correct his prior mistakes, Obama believes that if there have been errors, they are those of the Republican House or manufactured by knee-jerk Fox News and talk-radio extremists. In 1979, most Americans conceded the mess that Carter’s sanctimoniousness had caused; 35 years later, most also see the wages of Obama’s failure, but only quietly so.

4. Finally, the country is somewhat different. True, Carter inhaled the fumes of Vietnam. But our current isolationism is more than just exhaustion over Iraq and Afghanistan. Foreign policy is now seen as antithetical to domestic spending, as military readiness comes only at the expense of public entitlements. With record percentages of Americans on state and federal help, Obama masterfully has framed old U.S. responsibilities as the crazy things that George W. Bush and his ilk incurred, which will only disrupt his more important effort to “fundamentally transform America.” Cyrus Vance gave way to more realistic advisers; the liberal Hillary Clinton is now considered pragmatic in comparison to what has followed.

There will be no Obama Doctrine. More likely we will see a doubling down on reducing U.S. influence — with the end of reshaping a too-prominent global profile, which itself was supposedly a result of unfairly acquired advantage.