By Victor Davis Hanson // Works and Days by PJ Media 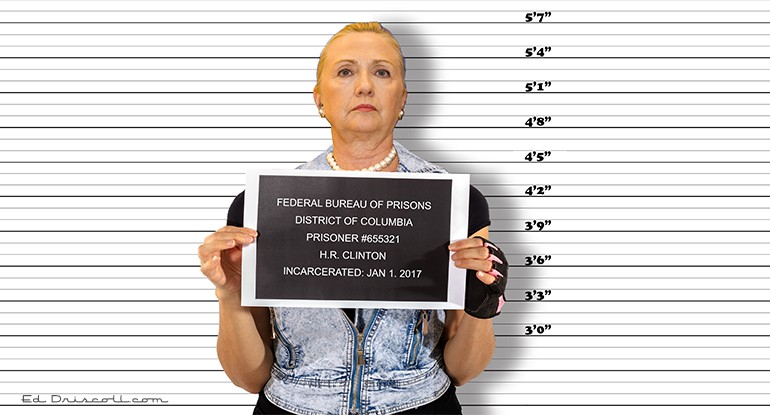 Any fair reading of State Department and general federal government laws regarding the use of classified information by federal employees makes it is clear that Hillary Clinton violated the law—both by improperly setting up her own private server, and then by sending information through it that was classified. And it is evident that Clinton went to such extraordinary lengths in order to mask her communications and shield them from the sort of Freedom of Information Act suits that now are plaguing her—and that she arbitrarily decided which of her private server emails were public and which private, and then simply destroyed thousands of them without audit.

If she is not indicted by the Obama administration for violations of federal laws or conspiracy to obstruct justice, in the future it will be almost impossible to prosecute successfully any federal employee for violating government protocols about the handling of classified information. If Clinton avoids indictment, it will make a mockery of the Obama Justice Department that sought to prosecute Gen. David Petraeus for showing his personal journals, which contained classified information, to his biographer and mistress Paula Broadwell. The government leveraged Petraeus on the basis that he knew his notebooks contained classified information though they were not formally identified as such; Hillary Clinton knew the same about her own communications, but unlike Petraeus was sneaky enough not to admit to that fact on tape or to associates.

In 2007, special prosecutor Patrick Fitzgerald indicted and then won a conviction against Scooter Libby, in an investigation that ostensibly began over accusations that Libby had leaked the “covert” status of CIA operative Valerie Plame, the spouse of flamboyant loudmouth Joseph Wilson, who was making wild (and later to be proven unfounded) charges against the Bush administration. Yet in a bout of prosecutorial (and politicized) overreach, Fitzgerald had known all along—but kept quiet—about Secretary of State Colin Powell’s aide Richard Armitage being the self-admitted leaker of information concerning Plame’s employment with the CIA. And Fitzgerald also either knew or should have known that Plame was not really a covert operative but instead was widely recognized to have worked at the CIA. Given such precedents, how can the Obama administration possibly determine the degree of wrongdoing of its own former secretary of State and the likely Democratic presidential nominee? The answer is that this is now a country, after all, that jails a video-maker on a trumped-up probation charge to cover up false talking points about a supposed riot of aggrieved Muslims who ad hoc showed up to kill four Americans. And it jailed Dinesh D’Souza, another video-maker, on a rather minor campaign money-raising infraction.

Federal immigration law simply no longer exists—at least for anyone from Latin America or Mexico who crossed the southern border illegally. President Obama himself, prior to his reelection bid, warned immigration activists that to suspend enforcement of federal law was the act of a king, not a president—and then got reelected and committed the very monarchial sins that he warned about. Presumably if a French woman or a Vietnamese man tried to cross the northern border of the U.S. illegally, he or she would probably be detained. In other words, immigration law has been reduced to a question of ethnic politics and Democratic Party demography. Charges of “racist” in connection with immigration actually are true—but the slurs are directed at the wrong parties: those who insist on open borders do so entirely on ethnic grounds, privileging Spanish speakers in a way they do not Swiss who forget their passports at the airport customs office or Russians who overstay their visas. Quite simply, whether federal immigration law exists depends entirely on the ethnic identity of the transgressor and the perceived political advantage of non-enforcement.

Well over 300 sanctuary cities have unilaterally declared that federal laws do not apply within their jurisdictions. We thought this outrage had been settled some 184 years ago when John C. Calhoun fallaciously argued that South Carolina through its “ordinance of nullification” could pick and choose which federal laws it would follow—only to be slapped down by President Andrew Jackson, who saw the very idea of a constitutional United States threatened by such proto-Confederate invalidation. Jackson, remember, threatened to send in U.S. troops to settle the issue. Is it only a matter of time until conservative cities follow the Calhounist sanctuary cities and declare federal gun or environmental statutes non-binding? And then what might mayors of sanctuary cities say in reply: that it is secessionist to arbitrarily ignore federal law?

We talk a lot about Orwell’s 1984 as if it were a distant bogeyman. In fact, his dystopia is already here. We simply accept myth as reality and define it as true based on the degree of its utility in advancing a particular political agenda. “Hands up, don’t shoot” was a demonstrable falsehood, yet the sloganeering persists because it could have been said and thus should have been said and finally became said; the legal findings about the Ferguson shooting by the Justice Department were for all practical purposes rendered meaningless. The president’s made-up Cairo speech, the Duke lacrosse case, the Rolling Stone mythography, and the fantasies of “mattress girl” are evaluated only by the perceived intent of the falsifier: if these mythoi are deemed egalitarian and socially noble, then they become cries of the heart and thus true.

If one accuses a male on a contemporary campus of sexual assault, there will likely be no due process afforded the accused—and no consequences to the accuser should the allegations fall apart as groundless. The 5th and 14th Amendments simply vanished on campuses sometime around 2010, replaced by an Animal Farm slogan that one out of four women are sexually assaulted during their campus years (if true, Stanford, Yale, and Columbia parents certainly would long ago have moved their daughters from tony dorms to downtown apartments in statistically far safer East Palo Alto, downtown New Haven, or Harlem)—and thus any means are necessary to stop the violence.

There also is no longer a 1st Amendment on campuses or in many workplaces. Try offering a public lecture on the misguided nature of Black Lives Matter, expressing doubts about the theory of man-caused, radical global warming that might be averted by huge government programs and investment, or doubting the wisdom of traditional marriage for gay couples. It is likely that the lecture would be stormed, and the speaker shouted down—as if someone were defending the Versailles Treaty in Munich during the late 1920s, or praising Trotsky in Moscow around 1927.

To navigate these realities, bureaucrats and government employees know that loud liberal allegiance might be more likely to win exemption than perceived conservatism. Professors likewise understand that de facto liberal identification is akin to Communist Party membership around 1935, a wise investment both for career advancement and to offer a parachute if one ever found himself in extremis. If former President George W. Bush were shaking down foreign interests and Wall Street investors to donate to a “Bush Initiative”—while Jeb Bush as secretary of State was massaging U.S. foreign policy on the basis of who gave or did not give to his family’s’ foundation—both Bushes, without a party membership button, would be indicted for racketeering. Certainly, the New York Times would be calling for a special prosecutor.

The end of constitutional America comes not loudly and suddenly with jackboots and brown-shirt thugs, but more insidiously with soft-spoken totalitarians and their “noble” appeals to advancing fairness, diversity, and equality—while identifying as enemies of the people any who commit thought crimes and thus as obstructionists deserve exactly what they get.