Al Gore is at it again, recently charging that “American democracy has been hacked” by 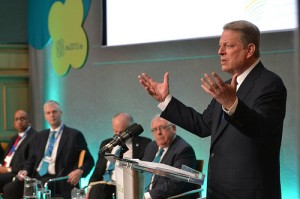 special interests and accusing his political opponents of “political terrorism.”

This comes from a big-government, high-tax advocate who raced to unload his share of a hyped, but failed cable station to avoid newly enacted higher capital-gains taxes. Gore sold his wares to an anti-Semitic and often anti-American Middle Eastern media conglomerate that became the de facto public megaphone of bin Laden (a real, not a just a “political,” terrorist), and whose business losses and Gore’s huge profits were subsidized by a Middle Eastern authoritarian regime, whose riches came almost exclusively from selling climate-changing oil and natural gas. All that is hard to pull off, even for Gore.

Whether we look at recent climate data versus Gore’s last two decades of hysterics, or follow Gore’s entrepreneurial career of using his contacts in government and his government-made media profile both to hype a “crisis” and then offer his own-profit driven bromides to enrich himself from it, there is no better example in contemporary American life of a proverbial “special interest” taking full advantage of the elite contacts he made during long government service.

Listening to Gore makes one almost believe in the old Freudian syndrome known as “projection”—each time Gore accuses someone of some supposed sin we see a glimpse into his own anguished soul, as the loud accusation becomes a sort of tortured way of coming to terms with his own unattractive and morally compromised career.