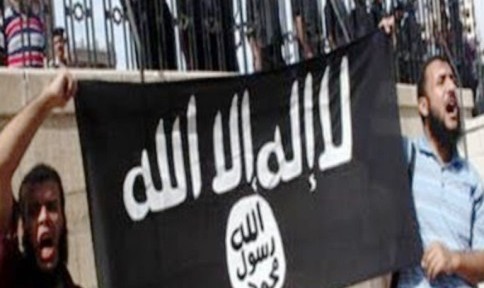 Days ago, al-Qaeda’s Egyptian leader, Ayman Zawahiri, portrayed  the overthrow of Muhammad Morsi and the Brotherhood as a “Crusader” campaign led by Coptic Pope Tawadros II who, according to Zawahiri and other terrorists, is trying to create a Coptic state in Egypt.

Since then, not only are Egypt’s Christians and churches now being attacked in ways unprecedented in the modern era, but new reports indicate that al-Qaeda’s black flag has been raised on some of them, specifically St. George Church in Sohag.  Considering that it was al-Qaeda linked terrorists who  initiated one of the bloodiest church attacks in recent history, the 2010 Baghdad church attack where nearly 60 Christians were slaughtered (click here for graphic images), that al-Qaeda is singling out Egypt’s Christians bodes ill.

The Islamic terrorist organization’s incitements against the Copts are just the latest to emanate from Islamists—from the top of the Brotherhood leadership to the bottom of the “Muslim street”—creating something of an “open season” on Egypt’s Christians.

Days after the overthrow of Morsi, the supreme leader of the Muslim Brotherhood, Muhammad Badie, was first to attack by name Coptic Pope Tawadros for supporting the popular June 30 Revolution, which saw tens of millions of Egyptians take to the streets.  After Badie’s demonization of the Copts, assaults on Christians began in earnest.  Many churches were attacked and burned and several Christians were murdered in Upper Egypt; over in the Sinai, a young Coptic priest was shot dead, while the body of Magdy Lam‘i Habib, a Christian, was found mutilated and beheaded.  Due to the many death threats to Pope Tawadros, he has left the papal residence at the St. Mark Cathedral—which was earlier savagely attacked, when Morsi was still president.

This anti-Christian fury is far from sated and has taken on genocidal proportions.  While Al Jazeera was covering (and distorting) events in Egypt, a Libyan man named Tamar Rashad called in and said “I want to offer the good news to [Pope] Tawadros that, Allah willing, the day is coming when no Copt will ever again tread the ground of Egypt—and no churches.  We will no longer allow churches to exist.”  When the TV host appeared to protest, Rashad interrupted him saying, “It’s already decided, take your cameras and go to the churches and you’ll see what’s going to happen soon, Allah willing.”

To make matters worse, Sheikh Yusif al-Qaradawi, one of the Islamic world’s leading preachers and spiritual father of the Muslim Brotherhood, has given his formal stamp of approval to persecute Copts, recently posting a video saying that “Christians” and others “were recruited [by Egypt’s military] to kill innocent Muslims.”

As expected, all these incitements against the Copts issued by several top Islamist leaders have so upped anti-Copt sentiment that it has become difficult in the last few days to keep up with the attacks on them—so many and nonstop are the reports emanating from Egypt.  All throughout Upper Egypt—in Minya, Asyut, Sohag—Christians and their churches are under attack; dozens of Coptic homes and businesses have been set on fire.  Due to the risk to Christian lives, many churches are no longer holding regular worship services.

The situation has gotten so dire that Ibrahim Eissa, a popular Egyptian journalist and TV personality, apparently unable to keep silent over the plight of the Copts, recently said on live TV: “The Christians have suffered in Egypt, over the course of 2 ½ years.  Their churches have been burned, their children killed.  The Maspero Massacre occurred, where several Copts were slain.  Catastrophic fatwas appeared, calling them infidels and inciting against them….  No one has suffered as much as they.  Today, if any Christian attempts to join a protest, he does so at the risk of defying dozens of fatwas calling for his death and decapitation and the burning of churches, especially in Upper Egypt.”

With the ouster of Muhammad Morsi, Egypt’s Islamists have finally gotten the pretext they need to cleanse the nation of its Christian minority, the Copt’s—ironically, Egypt’s most native sons.

The unprecedented hate currently being visited on them is fueled by Islam’s “How Dare You?” phenomenon: As conquered non-Muslims, Christians must live as dhimmis, that is, according to traditional Islamic teaching, barely tolerated “infidels” who must be humble and submissive—to the point that they are not permitted to raise their hands to Muslims even when attacked.