The Savior Generals: How Five Great Commanders Saved Wars That Were Lost – From Ancient Greece to Iraq 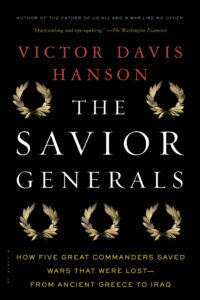 In this set of brilliantly executed pocket biographies, we have the stories of five generals who single-handedly saved their nations from defeat in war. War is rarely a predictable enterprise–it is a mess of luck, chance, and incalculable variables. Today’s sure winner can easily become tomorrow’s doomed loser. Sudden, sharp changes in fortune can reverse the course of war.

These intractable circumstances are sometimes mastered by leaders of genius–asked at the eleventh hour to save a hopeless conflict, created by others, often unpopular with politics and the public.

“Business has its turnaround artists; so does warfare. Classical historian Hanson presents five generals who retrieved wars from defeat, three Americans (William Sherman, Matthew Ridgway, and David Petraeus) and two from ancient history (Themistocles of Battle of Salamis fame and Belisarius, briefly the restorer in the 500s of the Roman Empire). As a group, they exhibit commonalities that Hanson develops through the specific situations they confronted. In each case, despondency descended on wars going wrong, and dispelling it as much as a strategic change of course lay behind these generals’ successes. Each one, Hanson argues, was a good communicator, up the line to their leaders, down the line to their soldiers, and more widely to civilians. Dispelling hopelessness by rejustification of a cause, explaining plans to redeem it, and restoring morale, they were, in Hanson’s view, contrarians who naturally irritated political interests with their repudiations of preceding failures of strategy. Ingratitude was usually these generals’ reward; after their rescue operations, most were shunted aside. Students of military leadership will be intrigued by Hanson’s astute set of cases.”
―Gilbert Taylor, Booklist

“Mr. Hanson’s fluency with a broad range of historical epochs, which has made him one of his generation’s most notable historians, is on full display in ‘The Savior Generals.’”
―Mark Moyar, Wall Street Journal

“It is not really news that Victor Davis Hanson has written another outstanding and eye-opening book. He has done that before and repeatedly, on a variety of subjects.”
―Washington Examiner

“An instructive series of portraits of five military outsiders called in to turn defeat into victory.”
―Kirkus Reviews

“An engaging book in which the action on the battlefield is placed within a larger perspective of the politics and the societies that go to war, and the qualities of the generals who fight those battles.”
―John E. McIntyre, The Baltimore Sun

“Students of military leadership will be intrigued by Hanson’s astute set of cases.”
―Booklist

“Great summer reading…In The Savior Generals, credit is given where it’s due.”
―Weekly Standard

“Provides widely applicable insight regarding the dynamics of leadership and consensus, and how those dynamics can change the destiny of nations.”
―Pittsburgh Tribune-Review

“Victor Davis Hanson has written another good book for a wide variety of audiences.”
―New York Journal of Books