The Land Was Everything: Letters from an American Farmer 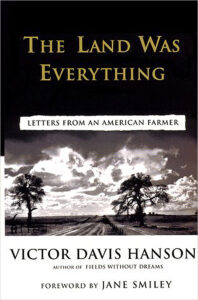 The author of Fields Without Dreams offers a firsthand perspective on a farmer’s continual struggle against drought, disease, insects, rodents, government bureaucracy, financial overload, and other challenges confronting the modern farmer and explains how these difficulties promote such qualities as independence, stoicism, and resolution.

“What does the imminent death of the family farm mean to the average American? A great deal, declares Hanson, who as both a farmer and a classics professor (California State University-Fresno) imbues this provocative, eloquent polemic with personal experience plus an unshakeable agrarian vision that harks back to Greece, Rome and the early American republic. Agribusiness, says Hanson, has obliterated the rural culture that once was the matrix of American society. The superabundance bestowed by corporate mega-farms, he adds, comes at a price: factory farms, propped up by mostly hidden government support and dependent on toxic pesticides and fertilizers, pollute the air, water and soil as they turn out bland, tasteless produce for a voracious, rootless and soulless consumerist society. Hanson (Fields Without Dreams) is totally unsentimental about small-scale independent farming; far from being tranquil, bucolic and simple, he reports, it is a brutal, dirty, maddening, messy, always difficult, sometimes deadly pursuit. Yet family farming, he insists, cultivates bedrock values–reliance on self and family, distrust of complexity and bureaucracy, skepticism of taxation, willingness to stand up to evil (whether the enemy be insects, weeds or monopolistic landowners)–values that are integral to a resilient, egalitarian democracy but that he believes are now in short supply. Hanson models these impassioned essays on Crevecoeur’s 1782 classic Letters from an American Farmer and sprinkles his barbed critique of contemporary American culture with allusions to Virgil, Pericles, Pindar, Euripides and Thucydides. Even if readers don’t plan to go back to nature, his feisty, curmudgeonly, challenging, ruminative essays provide much food for thought.”
–Publishers Weekly

“When St. John de Crevecoeur wrote his Letters from an American Farmer 200 years ago, he described the emergence of a new type of citizen, the independent small farmer who embodied the ideal balance of wildness and culture, intellect and experience. According to Hanson, a fifth-generation grape farmer and classics professor, this type of individual has been the foundation of American democracy. However, as a result of the yeoman’s displacement by corporate agribusiness and suburban sprawl, the moral fabric of America is unraveling, and “no intellectual has stepped forward to craft a higher culture for the people beyond materialism and consumerism.” In this superbly quotable book, Hanson shows us a way of life that is irrevocably disappearing. Though the farmer must contend with an endless array of difficulties and obstacles, his resourceful and determined efforts to bring order to this chaos shape his unique character. The passing of this agrarian life has meant the passing of “ethical restraint on the economy.” Like Wendell Berry, Hanson writes eloquently about the intrinsic worth of a lifestyle that values family and community, but unlike Berry he focuses more on the constant and multifarious problems and obstacles which the small farmer faces day to day. Written with passion and honesty, this informative work is highly recommended for academic and public libraries.”
–Ilse Heidmann, Library Journal