Ripples of Battle: How Wars of the Past Still Determine How We Fight, How We Live, and How We Think 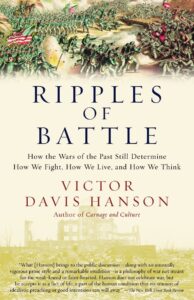 What defines a “watershed event,” a moment in history that changes the world forever? Victor Davis Hanson tackles this intriguing question in an eye-opening look at three great military encounters: Okinawa, Shiloh, and Delium, an obscure battle of the Peloponnesian War. A master of military detail, Hanson describes the strategies and tactics, and the terrible cost in human life, of each battle. These vivid accounts set the stage for a wider inquiry into the long-term, often unintended, consequences of war.

Beginning with the most recent battle and working backward in time, Hanson starts with Okinawa (1945) and its legacy. While many have drawn comparisons between the 9/11 pilots and the Japanese kamikazes, Hanson argues that the real significance of the battle was the heightening of America’s resolve to win the war at any cost. The failure of suicide tactics was also a vital catalyst in ending Japan’s militarist leadership and setting the country on the path toward democracy. Next, Hanson explains how the death of Confederate Commander-in-Chief Albert Sidney Johnston at Shiloh (1862), long considered a turning point in the Civil War, gave birth to the myth of the Lost Cause—the belief that only a tragic accident of fate destroyed the South’s noble dream. The stubborn devotion to this reactionary view would slow Southern progress for a century. Turning to the battle of Delium (424 B.C.), Hanson shows how the ripples of each battle spread and deepen with the passage of time. Little remembered today, the battle inspired a tragedy by Euripides, profoundly altered the direction of Western philosophy (Socrates was one of the few Athenians to survive), and virtually created Western infantry tactics.

Employing the lens of the past to bring the present into focus, Ripples of Battle is a work of penetrating insight and profound understanding of the human cost and consequence of war.

With this usefully idiosyncratic and provocative work, Hanson may succeed the late Stephen Ambrose as America’s laureate of military history.
―Publishers Weekly

Arguing for the primacy of military history and its crystallization around key moments of life and death, Hanson looks at three highly influential, yet often overlooked, battles in three highly influential wars. Moving backward, his narrative covers suicide bombers at Okinawa, the death of a key southern general at Shiloh, and the survival of Socrates in the battle of Delium in 424 B.C.; key ripples of these events include the use of the atom bomb, the popularity of Ben-Hur, and the definition of all western philosophy, respectively. In extrapolating the webs of causality and coincidence surrounding important moments and always asking “what if?” Hanson reveals surprising connections that many historical narratives miss, and that is this book’s strength.
―Brendan Driscoll, Booklist