Mexifornia: A State of Becoming 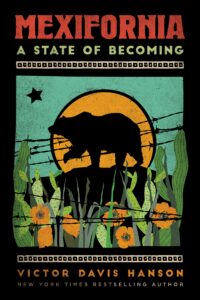 Part history, part political analysis, and part memoir, Mexifornia is an intensely personal work by one of our most important writers. Victor Davis Hanson, known for his military histories and his social commentary, is a fifth-generation Californian who lives on a family farm in the Central Valley and has written eloquent elegies on the decline of agrarianism. Here he ponders what has changed in California over the past quarter century, examining how the state and the Southwest more broadly―indeed, the entire nation―have been altered by hemorrhaging borders.

Hanson admires the ambition and vigor of immigrants who have helped make California strong, but he indicts the disordered immigration policies that led to the present mess. He also illuminates the ways those policies are harmful to people who have come from Mexico and Central America seeking a better life in the United States.

Nearly twenty years after the first publication of Mexifornia, Hanson offers an update on the continuing tragedy of illegal immigration. At the same time, he remains hopeful that our traditions of integration, assimilation, and intermarriage may yet remedy a predicament created by politicians and ideologues.

“Victor Davis Hanson writes powerfully about how California has become ‘Mexifornia.’There is no reason to think that such a trend will stop at the state’s borders. To the contrary, California offers a window onto the future.”
―Heather Mac Donald, City Journal

“Hanson is immensely sympathetic to poor Mexicans … and the most powerful chapter outlines the harried life of the illegal alien. But he hates to see the ordered culture in which he grew up drowned by alien inundation whose undeserving beneficiaries are Mexico’s kleptocratic rulers, for whom an open border is a safety valve expelling the potential for democratic change.”
―Booklist

“Hanson’s criticisms are directed at The System, especially a left-right alliance winking at an open boundaries policy that first beckons, then exploits and corrupts industrious illegal immigrants.”
―Los Angeles Times

“One of the most enlightening books yet written on one of our most difficult subjects.”
―National Review

“The strength of this book lies in the unique perspective Hanson brings to his material.”
―Commentary

“A controversial, fascinating argument about immigration from Mexico and the effect it has on both California and the immigrants.”
―Weekly Standard